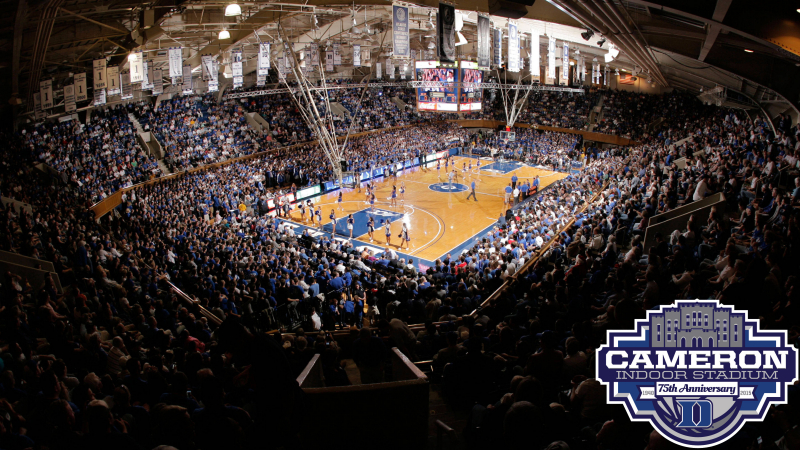 Duke played its first-ever intercollegiate basketball game in 1906, the Blue Devils took the court in a new arena. The Ark was formally known as the Angier Duke Gymnasium. It is located on the site where Duke’s present-day East Campus is. The stadium hosted Durham, North Carolina’s inaugural college hoops matchup as the Blue Devils lost to Wake Forest College 24-10.

In 1935, basketball coach Eddie Cameron drew up plans for a new stadium two miles west of The Ark. The stadium was designed by Julian Abele. While, the architectural firm that built the Palestra was brought in to build the new stadium. At the time, it was the largest gymnasium in the country south of the Palestra at the University of Pennsylvania. The brand-new 9,500-seat venue cost $400,000 at the time and was dedicated on January 6, 1940 as Duke Indoor Stadium. It eventually became one of the most hallowed arenas in all of basketball. Currently, the official seating capacity is at 9,314.

On January 22, 1972, the stadium had a name change and was named Cameron Indoor Stadium. Its name change was to honor Eddie Cameron, who served at Duke as men’s basketball coach from 1928 to 1942, football coach from 1942 to 1945, and athletic director from 1951 to 1972. The facility is the primary indoor athletic venue for the Duke Blue Devils. It further serves as the home court for Duke men’s and women’s basketball and women’s volleyball.

The stadium was first renovated in 1987–1988. Renovations included the removal of the standing room areas, installation of an electronic scoreboard and display over center court, wood paneling, brass railings and student seats. However, it brought the capacity to 9,314, though now there is sufficient standing room to ensure 10,000 could fit. For high profile games, students are known to pack in as many as 1,600 into the student sections despite being designed for a maximum of 1,100.

Prior to the 2002–2003 basketball season, air conditioners were installed in Cameron as a response to health and odor concerns for players and fans alike. Where else, before the 2008–09 season, a new video scoreboard replaced the electronic board over center court. And, prior to the 2009–10 season, more changes were made, including installing LED ribbon boards to the front of the press table and painting the upper seats Duke blue.

One can hear the “Cameron Crazies” supporting the Duke team with loud cheering from miles away. Their noise level was recorded as high as 121.3 dB, which is louder than a power saw at 3 feet or a jackhammer.

If that does not impress you on how passionate Duke fans are. This piece of information will convince you. Students reside in tents for months in an area outside of Cameron known as “Krzyzewskiville” for access to major games, including those against the University of North Carolina, . The hardwood floor was dedicated and renamed Coach K Court in November 2000. “The most important thing for me is being in this gym,” Krzyzewski said after winning his 1,000th game at Duke in November, 2017. “It’s an amazing thing when you have great moments individually, but when you can share great moments is the best.”

Cameron Indoor Stadium was originally the largest indoor arena in the South but, today, it is one of the smallest in the nation. Nevertheless, sellout crowds, top 25 rankings, and championships of every variety have become the norm for the stadium. Additionally, the “creative harassment” of student spectators has given Duke the honor of being known as “one of the toughest road games in the USA,” according to USA Today and any visiting team that has ever played in Cameron. In its June 7, 1999, issue, Sports Illustrated rated Cameron Indoor Stadium fourth on a list of the top 20 sporting venues in the world in the 20th Century. It was ranked ahead of Wrigley Field, Fenway Park and Pebble Beach Golf Club.

The Blue Devils have had an amazing amount of success in Cameron, winning over 80 percent of their games all-time. In 1999-2000, Duke established both the Atlantic Coast Conference and school record by extending its home winning streak to 46 games.

Despite the changes that have taken place, Cameron Indoor Stadium has remained very much the same over the last 70 plus years. Its most enduring character remains in the spirit of the Duke team and its fans.

For more information on the Cameron Indoor Stadium at Duke University please read these additional pages:

Ticket Policies:
Read about our ticket guarantee and refund policies.